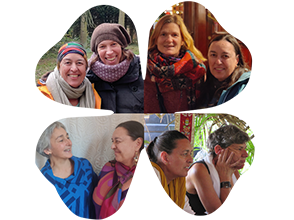 To allow yourself an inner travel,
while listening softly.

What is this? Does it help managing stress? YES  :-)
It is a soft and slow practice, rebalancing the autonomous nervous system, by reactivating its para-sympathetic part, linked to relaxation and regenerative functions of the body. (digestion, sleep, cells, immunity...).

By the end of each workshop, each participant will have learnt a restorative series to be practised at home.

Each of the 4 teachers have the self-experience of specific restorative yoga:

Isabel is yoga Alliance (200h) certified with François Raoult (2017). She attended Viviane’s classes for 3 years to complete her training. She then pursued her training with François pour accomplish 500h (2022). In the meantime, she also studied (over 140h) with Judith Lasater and her trainees.

Amy has been initiated to the Iyengar Yoga in India with Sharat Aurora: Dharamsala 2004-2008. Back in Belgium, she has been Viviane’s yoga student for 5 years (2008-2013). Interested in teaching yoga, she certified 200h with F. Raoult (Yoga Alliance - 2015). Her interest in Ayurvéda, the practise of meditation and yoga are precious gifts to better live with the Crohn auto-immune disease. Her mantra: "Listen to what echoes"…

Tania, teacher by profession, has been practising Yoga since year 2000. She followed numerous workshops and attended regular classes with Viviane for 10 years. She also has a daily practise to deal with the fatigue caused by autoimmune diseases... She is certified from yoga Alliance (200h) with François Raoult (2017).

Agnes, physiotherapist, osteopath and Yoga teacher with over 40 years of experience.